The gorge gaped immense, swallowing villages far below as we travelled onwards, upwards — a scene wildly contrasting the ironed white tablecloth, mint tea and nut crescent before me. My refreshments were advancing towards Slovenia at considerable speed but, alas, were not destined to survive that far. The train’s dining car, with its comfy black leather seats, popsicle-shaped lamps and a lack of screaming children was almost empty on a Tuesday morning. An impeccably-mannered steward in crisp ÖBB uniform brought any coffee or pastries desired, prompting the need only to sit back and lose one’s thoughts in the Austrian countryside tumbling by. Stretching ahead: holiday, liberation from the heaviest trappings of a tech-heavy lifestyle, and the rail heritage of the Austro-Hungarian empire. And maybe a slice of that gluten-free apple strudel.

Tagskryt. Or, in Swedish, ‘train bragging’. It’s the flip side of the ‘flygskam’/’flight shame’ many of us are now feeling as we begin acknowledging the climate impact of our flying habits.

While the term sounds fairly smug, train bragging is what we need more of. (As well as an aviation kerosene tax that both makes flying more realistically priced and subsidises more environmentally-friendly alternatives like trains). We need to show how rewarding, and even affordable, the alternatives to flying can be. 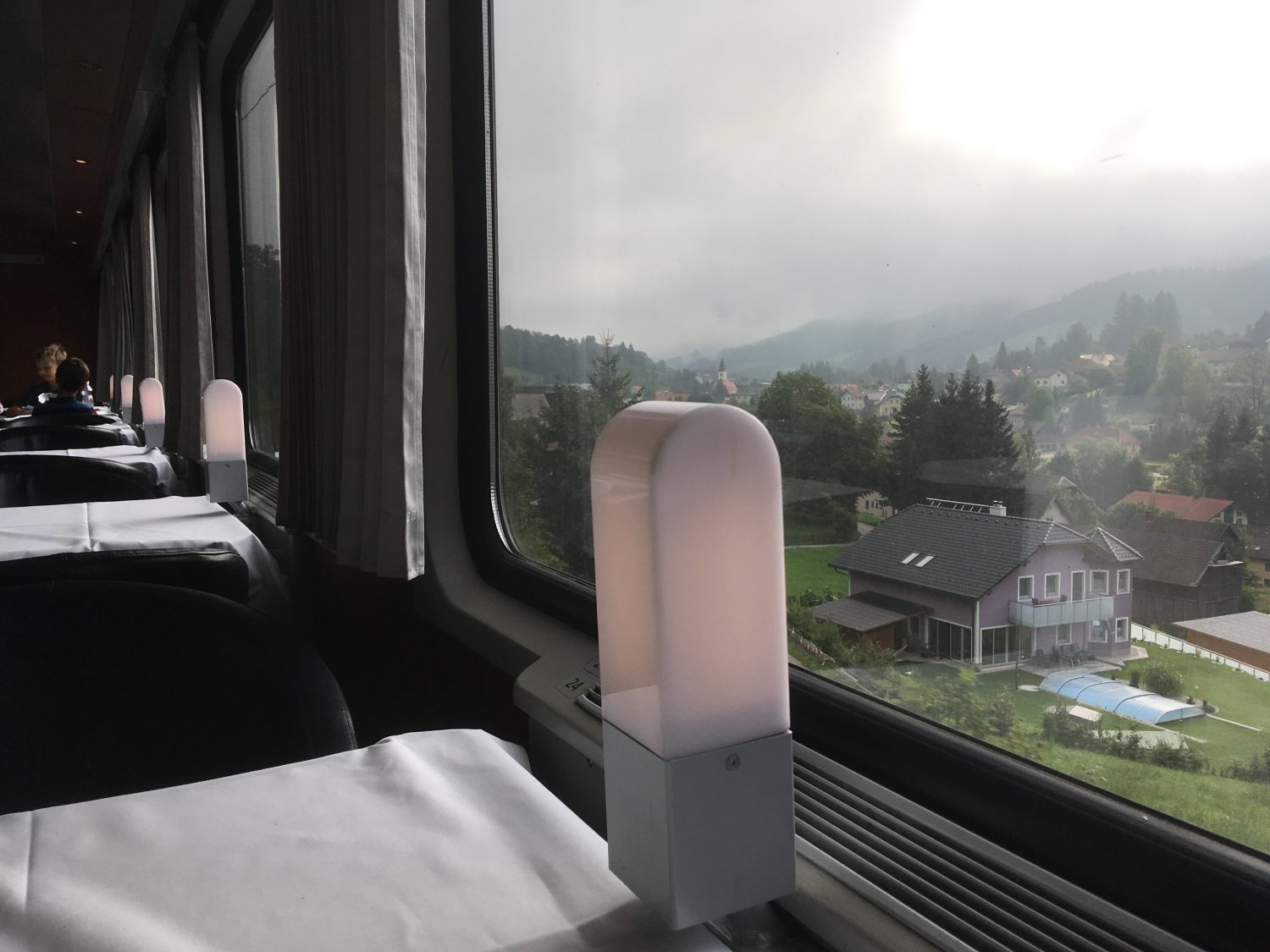 Travelling by ÖBB train from Vienna to Villach, en route to Slovenia

My first laptop-free holiday in 1.5 years started in Berlin, 6.50pm, as I boarded the red, white and blue Nightjet train that had just trundled up to Berlin Ostbahnhof station. The Austrian national rail service — Österreichischische Bundesbahnen or, for short, ÖBB — has operated Germany’s night trains since Deutsche Bahn a few years ago made the badly-timed decision not to bother anymore. I entered a cosy shared cabin to come across a young Austrian family settling in for their return to Vienna, stashed my gear, and answered the inquiring steward that I would indeed like the inclusive Viennese breakfast at 7 am. Settling back in the middle couchette bunk, I watched Berlin morph into Brandenburg and then Poland, before being gently rocked to sleep. Waking up in Vienna when you fell asleep in a different country is a wonderful experience.

Although some perceive the city to be a grand but stale open-air museum, its rich milieu of cuisine, history and culture came to life for me over four days: through the eyes of Viennese friends, amongst newspapers on the marble-topped tables of its coffee houses, in the presence of modernist-era artworks from Klimt and Schiele, at the typical ‘Heuriger’ restaurant in its hilltop suburbs (serving wine from the vines next door), and in a chance encounter with an Australian opera singer. To take a break from it all, I even t0ok an hour’s train ride to the much more modestly-proportioned city of Bratislava in Slovakia. 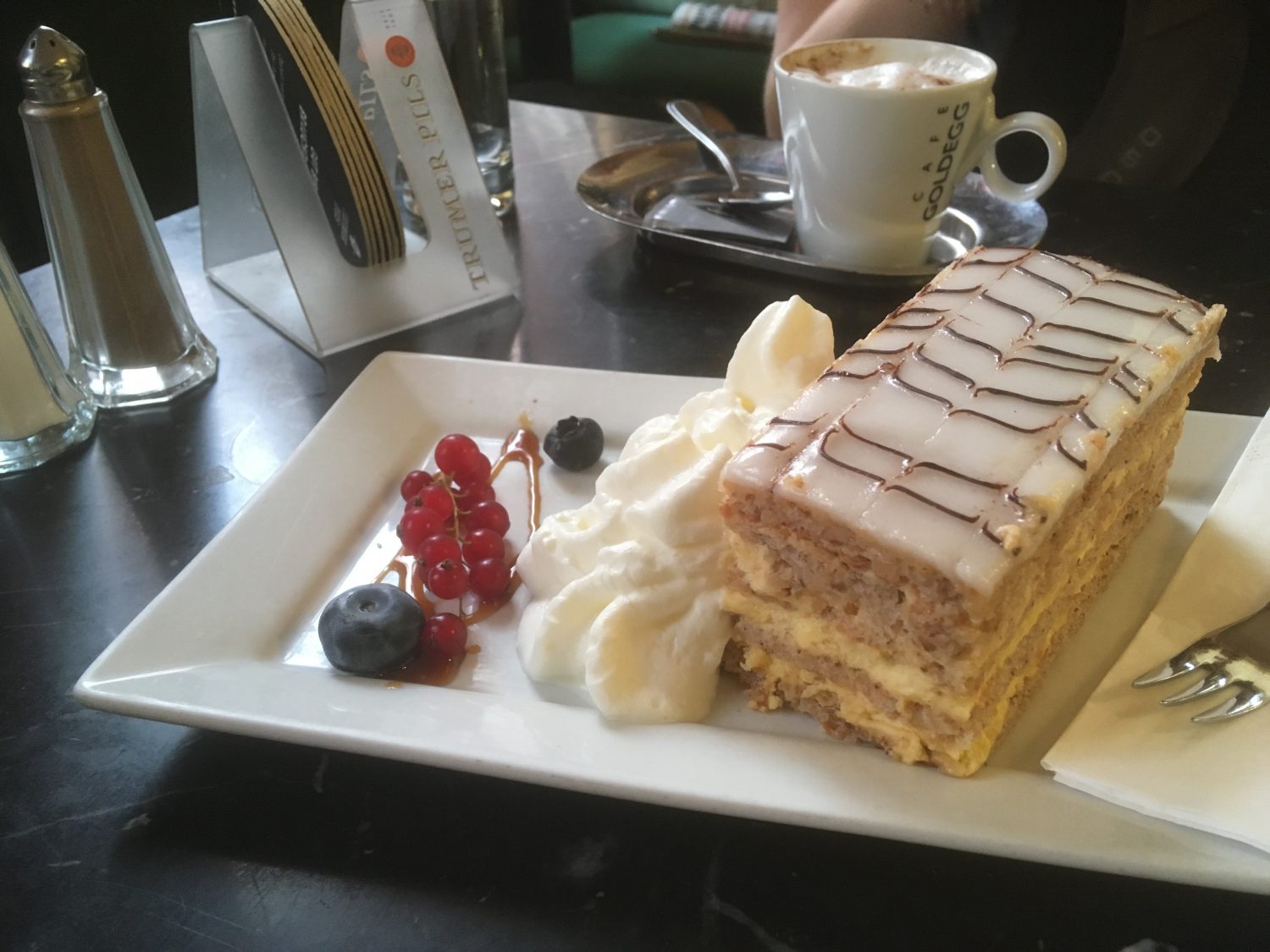 Viennese cakes — (probably) the secret behind the former might of the Austro-Hungarian Empire. This one: The lesser-known but delicious Esterhazytorte.

Train travel in Central Europe is particularly fascinating when you consider that the downfall of the rail-loving Austro-Hungarian Empire happened about a century ago, following its defeat in World War One.

The empire left myriad and long-lasting marks on many countries, one of the more positive of these being its comprehensive and remarkable railway network spanning from Switzerland to Romania. Although Austria-Hungary’s Imperial-Royal Rail Ministry was dissolved in 1918, with assets divvied up amongst successor states, it laid the foundations for many rail routes — including the one carrying me to Lake Bled in Slovenia.

From there, I joined an international group of travellers to spend three days tramping the rocky peaks of the Julian Alps in Slovenia’s Triglav National Park, hiking from hut to well-stocked hut, peeling our eyes for ibex and chamois mountain goats, chuckling at the chubby, paranoid marmots and scrambling through lunar landscapes. Before long, it was down to Ljubljana to rest my legs and appreciate some of Slovenia’s orange natural wine next to the river Ljubljanica, accompanied by the eclectic notes of an alfresco music festival. 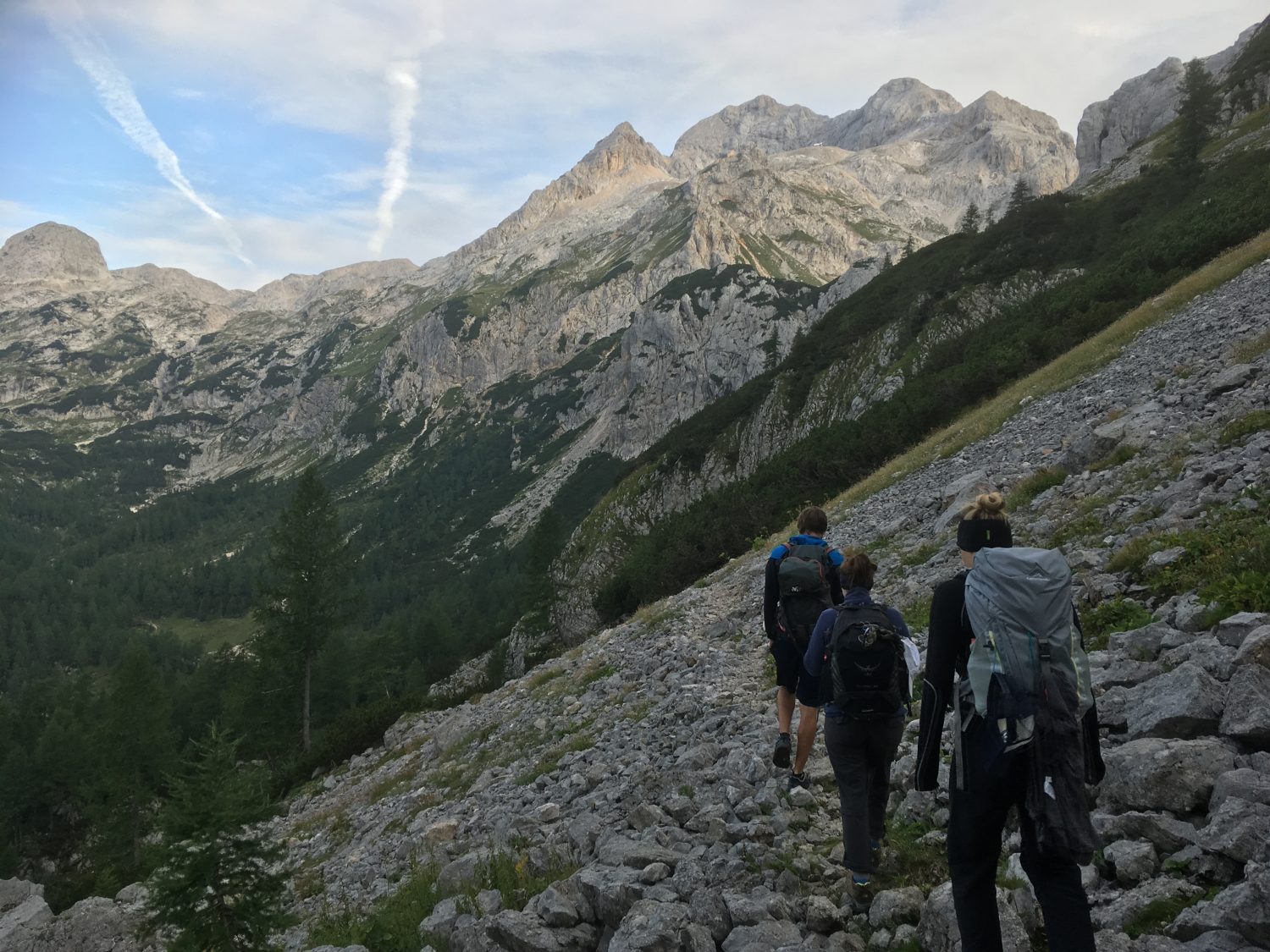 Hiking under the gaze of Slovenia’s highest mountain, Triglav, in the Julian Alps.

The modernist-influenced Ljubljana provided a smooth transition to the nearby city of Trieste, in Italy. Trieste was once the free port and global trading heart of the Austro-Hungarian empire, which necessitated the construction of the Südbahn rail line (completed in 1857) to link Vienna to its seaport. Its coffee and coffee houses are still top-class, reflecting centuries of coffee bean imports from all around the world and famous drinkers like Kafka and Joyce who debated and dreamed in these grand establishments. I revelled in the glowing coastal views — Croatia is just a small peninsula away — stumbled across the once-influential winemaking village of Prosecco, and embraced the Italian cuisine, flavoured further by Balkan and Austrian influences. 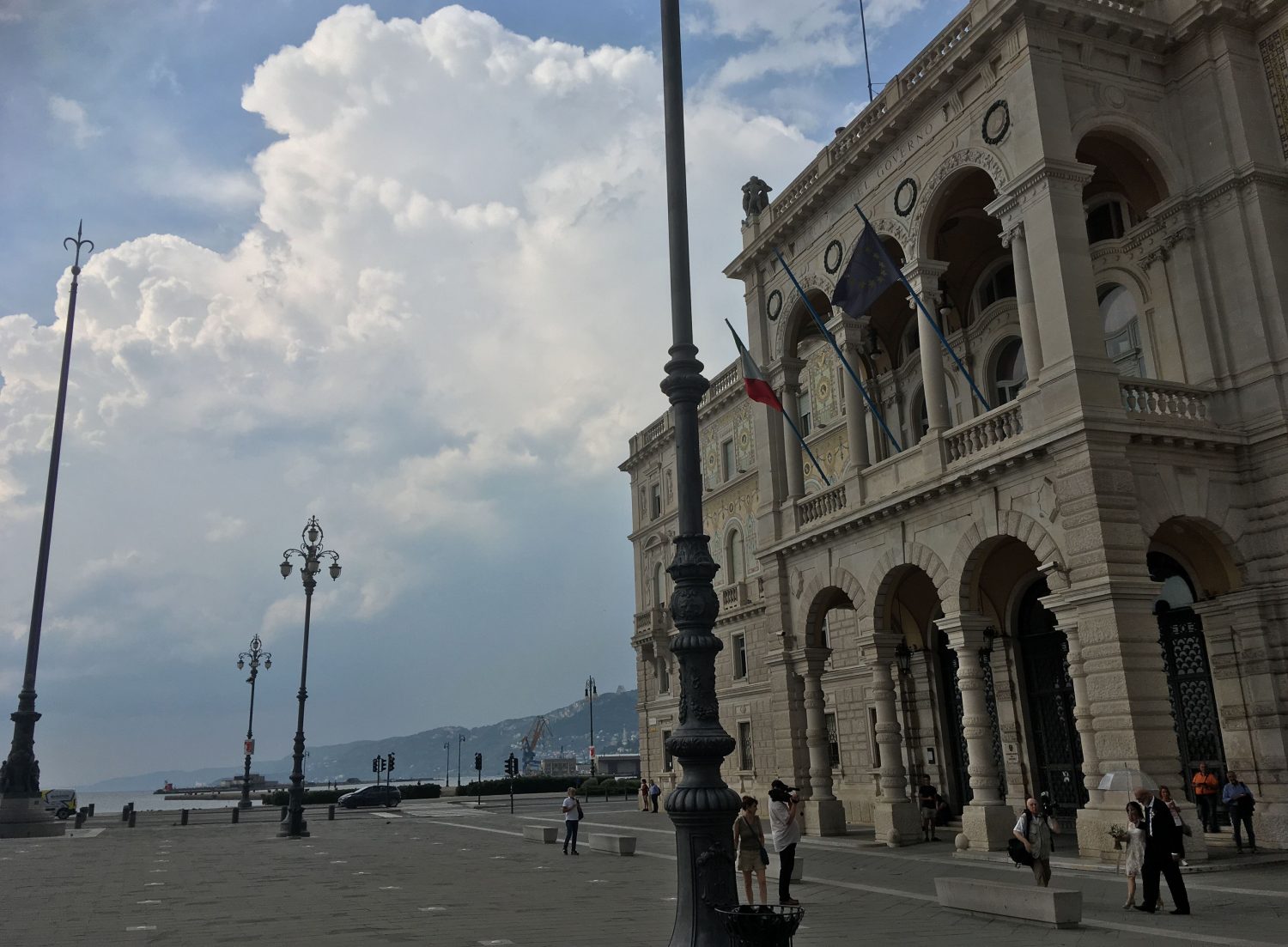 The end of the road: Trieste was the Austro-Hungarian Empire’s seaport and door to the world

Now travelling with Italy’s Trenord service, the coastal castles gave way to tantalising glimpses of the Dolomites, the train heaved a sigh of relief as half of its passengers disembarked in Venice and I broke up the journey with a few hours dodging tourist hordes in gorgeous, overloaded Verona.

Violently-squealing brakes heralded my arrival in Bergamo, a former stronghold of the Lombard Lords cradled in the foothills of the alps. The Venetian walls surrounding its hilltop old city seemed effective in keeping out selfie-stick crowds, with solely elegant Italian holidaymakers to be seen sauntering under its sunset-daubed towers.

Where Italians go, tasty things can be assured, and in this case, I discovered the gelateria that allegedly invented stracciatella and hearty multi-grain polenta smothered with molten swirls of local cheese. The next day carried me into the alps for a long-planned Lake Como rendezvous — reunions, swimming and aperitivo followed by a hectic dash to escape the thunderstorm announcing the end of summer. After a damp ferry ride from Varenna to Menaggio the next day, and bus and train legs to the Swiss-Italian city of Bellinzona, our autumnal suspicions were confirmed with the 2727 metre-high Pizzo di Claro peak coated in snow.

After a long weekend of visitations and explorations in the canton of Ticino, a pre-booked train carried me through the world’s longest train tunnel, the 57km Gotthard Base Tunnel and onwards amongst mountain and lake scenery to Zürich. More catch-ups awaited, before the 8 pm ÖBB Nightjet back to Berlin, this time sharing a cabin with architecture professors and Interrailers. 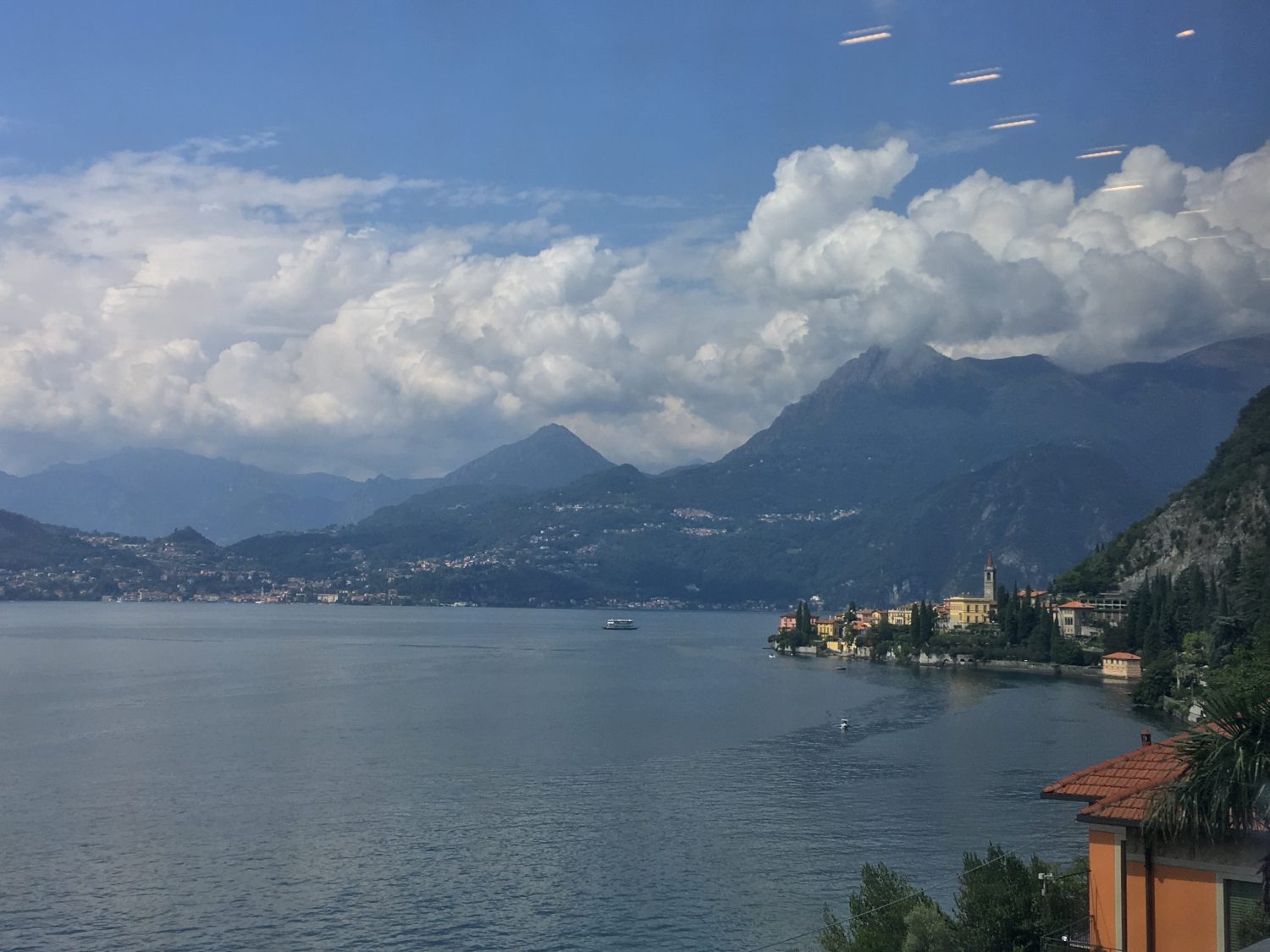 The rail approach to Varenna on Lake Como, Italy

One of the biggest criticisms levelled at train travel is its price. Agreed, it needs to get cheaper (and again, aviation fuel taxes need to play a part in this) but you may be surprised to learn that all of the train travel mentioned above (the buses and ferries, also) only cost me around €300. For the sheer amount of scenery, adventures and cultural exploration this afforded across almost three weeks, I’d still call this a bargain.

There are also plenty of ways to save on train travel — for example, if you book the Nightjet night trains in advance, you can get a berth in a shared couchette cabin starting from €50. If it seems like I’ve mentioned the ÖBB a lot, there’s a good reason for this: The now tiny country of Austria has again expanded its rail empire, this time by taking over the night train services abandoned by countries like Switzerland and Germany.

While some countries, like the Netherlands, have set prices for train tickets, the cheapest tickets are usually only available if you book a long time in advance. For cheaper day fares if you’re travelling through Switzerland, you could also try booking with the Italian, German or French rail services, as these sometimes offer cheaper fares on the same lines. Should you plan to do most of your train travel over a couple of days, it’s also worth looking at an Interrail pass, regardless of age — you can pay for days of travel, not for how far you’re going! Furthermore, if you’re planning any train travel, the website Seat61 is really worth checking out. 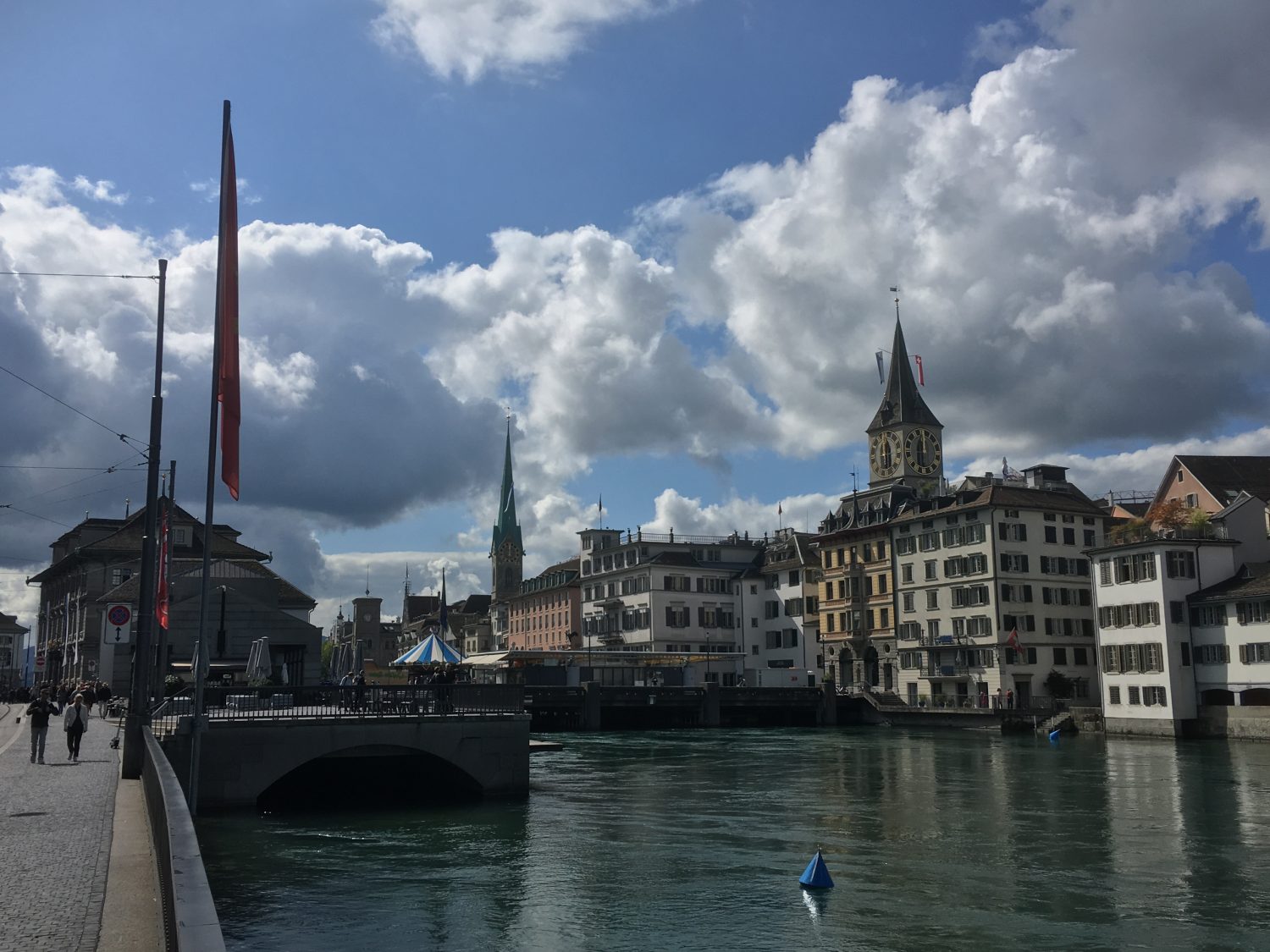 Strolling the Limmatquai in Zürich

Other people complain that they don’t have time to take the train, and fly instead. This is understandable but ask yourself: Are you really saving time with a flight instead of a high-speed train or night train without security queues, check-in drama and the increasing chance of strikes? Also, more employers are now open to remote work, allowing many people to work on the train en route to their destination. And new employment perks are emerging, such as extra holiday days gifted to staff to use more environmentally-friendly forms of transport. And sure, this all works for Europe. It’s harder if you are travelling from abroad. In this case, we need to ask ourselves if we really need to fly. If really necessary, it’s possible to carbon offset these flights (but only worth doing it with a certified offsetter — I use Atmosfair) and avoid short-haul flights via the many overland possibilities available.

Although sleeper trains are great for covering long distances, some people just aren’t up for sleeping in a room full of strangers, you have to be a bit security-minded about your valuables, and for side-sleepers like myself, the couchette bunks (a flat row of train seats) can be a bit too hard for a perfect sleep. Nevertheless, if you can afford it, there are private sleeper compartments with mattresses, washbasins and even private showers in the deluxe versions. The ÖBB night train’s plastic waste problem is also worth noting (even if they’re probably not the only offenders), with their single-use water bottles, coffee cups and plastic breakfast cutlery convincing me to skip breakfast on my next journey. So, while these are points to be aware of, the overall experience has otherwise always been an excellent one for me. 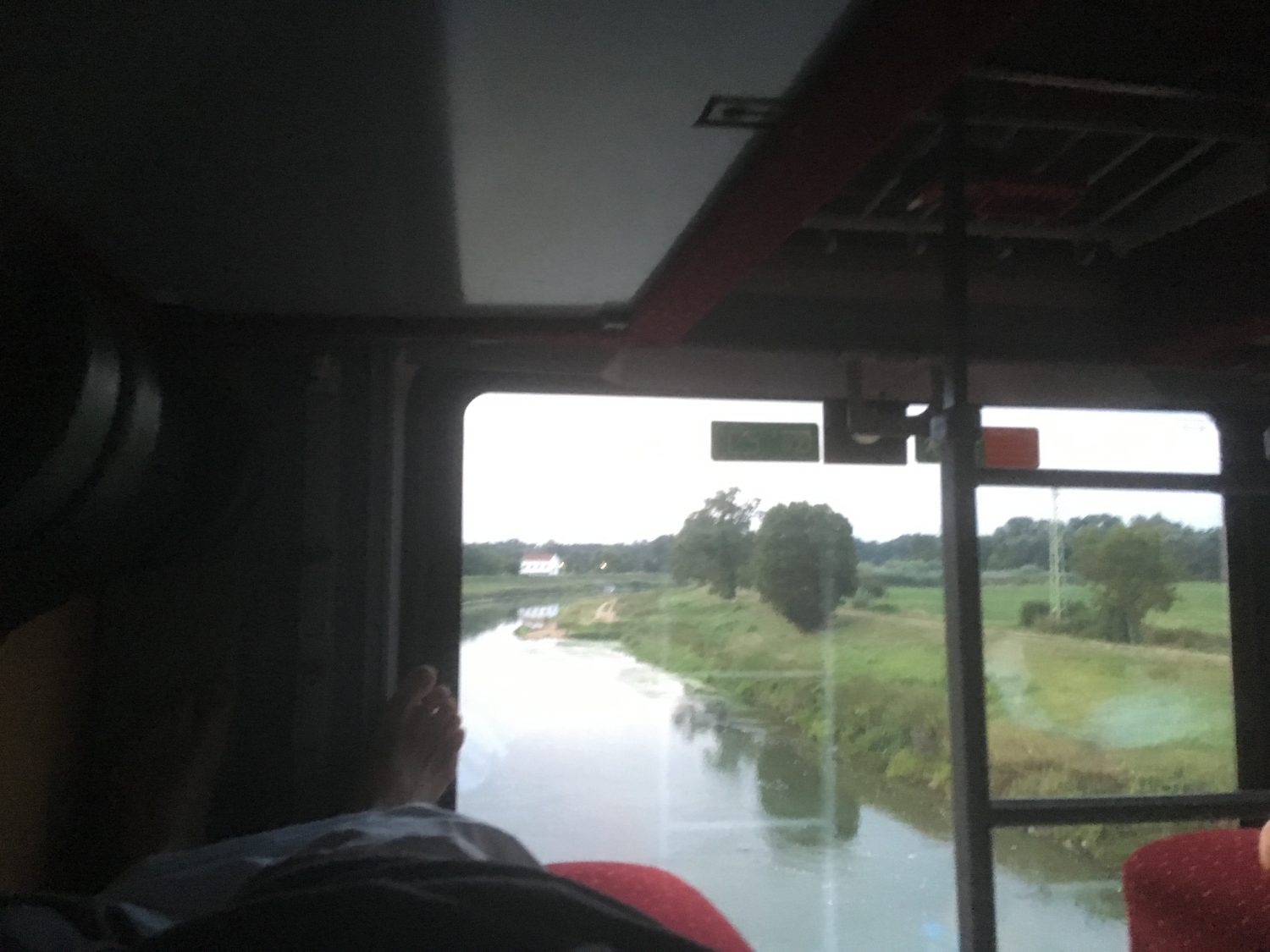 If you want more train travel inspiration, check out this Guardian listicle of top European train journeys — there are so many wonderful ones out there! I’d also love to take the Caledonian Sleeper from London to Scotland, the Milan-Sicily night train and travel back to New Zealand via the Trans-Siberian Railway. I’ve already booked my next train tickets — return trips to the Netherlands and the Baltic Sea in September and October — and a special one-way trip at the start of November. It’s a special trip because, after six years in Berlin, it’s time for a new adventure in Freiburg im Breisgau.

I’ll be carrying on with my brand storytelling work remotely but it’s almost time for a new adventure… Stay tuned to find out more!